Caring and Isolation in the Workplace

7 in 10 working carers (71%) have felt lonely or isolated in the workplace as a result of their caring responsibilities.

Over four out of ten (43%) working carers felt that colleagues and managers did not understand the impact of caring and 38% had not felt comfortable talking about their caring responsibilities at work.

Many working carers are at breaking point; a staggering third (32%) were caring for 50 plus hours a week, comprising over half (53%) of the carers who felt lonely or isolated in the workplace most of the time.

Nearly a quarter (23%) of carers received no support from their employer.

More than seven in ten carers (72%) said they would be less stressed if these issues were addressed and six in ten (60%) said that they would feel that someone understood their situation.

Over half (56%) of the carers who had given up work to care highlighted the stress of juggling work and care and a third (34%) the lack of suitable care services. 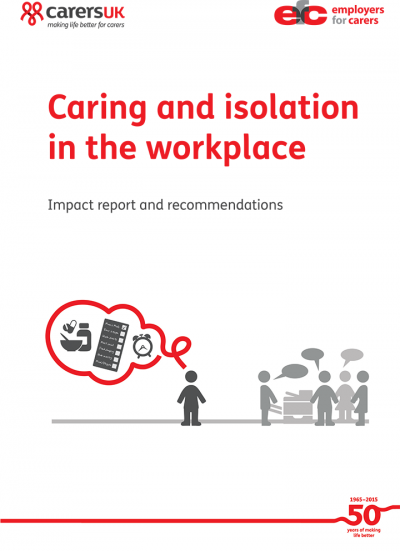 Links to local support groups and other advice & information sources:

Coalition of Carers in Scotland